The Mohawk Hall of Fame, Part Two - The Flame Throwers 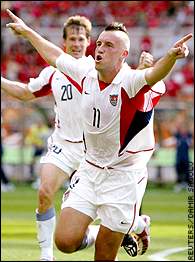 Clint Mathis. Is he a rock star? Is he a soccer playing phenomenon? Is he a psychotic freak? Turns out Cleetus is a little bit of all three. With limited consistency. You'll always have Seoul, dude. And Krispy Kreme.

Rancid, particularly the Liberty-esque Tim Armstrong.
The angles in his face! The angles in his hair! Webster's defines photogenic as suitable for being photographed especially because of visual appeal; see Tim Armstrong. Like Robert Duvall and Steve Buscemi, he ain't a handsome man. But can you take your eyes off of him? Give it a whirl and see Lars Frederiksen's colorific mo' on the Ruby Soho video here. 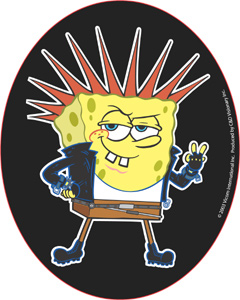 C'mon. I had to. He's got the do, the Docs, the spikes on his wrist AND he's family friendly. He wouldn't have to hang out at Super Weenie Hut Jr. looking this tuff. 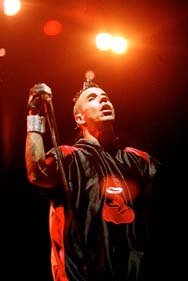 The Red Hot Chili Peppers' Anthony Kiedis. Always at the forefront of fashion, I knew he rocked the hawk for a while, but could not locate photographic evidence - thank you, Good Buddy and John Prine Ticket Master who prefers to remain anonymous!
Posted by mood at 11:59 AM

Email ThisBlogThis!Share to TwitterShare to FacebookShare to Pinterest
Labels: bloviations