June 3rd, On Which I Become a Music Critic 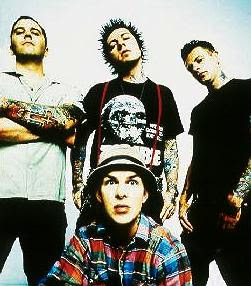 In the punk rock realm, diversity is expected. Anticipated, even. Psychobilly? Punk! Argentine ska? Uber punk! As long as you stay diverse in the same way you were the day punk rock embraced you. Artists who poke holes in the spiky black leather boxes they were put in get labeled sellouts faster than Travis Barker whales on drums.

The most Rancid-esque quote on this record is their manifesto: I heard G. B. H. I made a decision. Punk rock is my religion. Obviously, they meant the Clash and clearly, they’ve soldiered on through the early stages of discipleship in which their fervent punk essence is sworn and declared (e.g. their 1993 debut), to seasoned apostles of, well, if not exactly peace, love & understanding, then unity, equality and brotherhood. It must get very boring trying to stay "punk" and be a human being. The decisions one must make. Is this Big Mac punk? Crest or Colgate? What would Johnny Rotten choose? Rimshot. Can one have some financial security, and still be punk? If an album is produced to the point where the lyrics are mostly decipherable, is it still punk? Rancid, weathering the tides of life just like the rest of us, have put quite a lot of thought into those kinds of questions and come to the conclusion that appearance is nothing. Attitude is everything. Let The Dominoes Fall is the next step in the evolution of punk: the transition from talking about how you don't give a f**k what other people think, a/k/a youthful bravado and/or paranoid chutzpah, to actually genuinely not giving a f**k, because you're secure enough in your vision and talent not to be threatened by the opinions of others. So, all you rigid obsessive-compulsives who are going to say Rancid ain't punk, Rancid sold out, Rancid ain't nothing but corporate shills, shut up already. You're wrong.

1) Boom-shacka-lacka-lacka-lacka-boom. Seriously, who else, outside of Sha Na Na, has the cajones to do this? Matt Freeman's feral growl threatens to annihilate with just one lacka anyone who snickers.

2) Mandolins. All over the freaking place. Banjo on the acoustic disc. Was that a dobro? Risks taken.

3) No leitmotif, no 'concept', no cause. If there is one singular message this album tries to send, it's that this is a place where everyone can belong.

The best parts of this record: the choruses, especially Lulu and New Orleans; the bounce - goshdarnit, you can actually dance to Up to No Good; Brandon Steineckert's talent and the way he's just been absorbed by the band - just, wow. Like an amoeba feeds. Or The Borg assimilate.

The worst parts: pronoun agreements. The English major in me balks at 'to all our friends, on this I swear' - it's a personal problem, yes; and the multitude of choices to purchase. The basic cd. The expanded cd with the acoustic cd and dvd. The super-expanded-deluxe cds/dvd/vinyl/kitchen sink version. Which would not bother me so much if all the tracks were available in one purchase. I don't like the iTunes special tracks. But at least, they didn't go the way of so many artists and release the cd. Then six months later, release the expanded version. And, just in time for Christmas, release the special outtake version. Thanks for that, guys.

Civilian Ways is getting a lot of love, as it should. But for my money, all $32.58 including shipping, the best song Rancid has done to date is New Orleans. The chorus is full of beautiful similes - I particularly love scar on her velvet face one - and the last verse of 'it rained all night in New Orleans' sung with some rough emotion well, that's just killer. The acoustic version brought a tear to my eye.