Ok, it probably should be futbolistas, but it just didn't have the same alliterative flair.

Everybody's going. Juan Pablo Angel and Kevin Goldthwaite from RBNY. Presumably not together. Brendan Steineckert and Lars Friedriksen from Rancid. Most definitely together.

The morning shows were scarfed., but not impressively, because, duuuhhhhhh, everybody is out there in Seattle.

and having Nick Rimando on hand to hand them out. 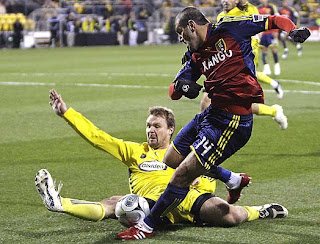 Short personal anecdote: my oldest child, when he was tiny, 4ish perhaps, saw his dad and myself in our wedding photos. Where am I? he asked. Well, you weren't born yet, we said. His eyes popped in disbelief and gradually his mouth formed an "o" of understanding. And that was an important life lesson for him: the world existed before he was born, and would likely continue after he was gone.

And so it was for the Columbus Crew Thursday. The MLS Cup, and the quest thereof, was there before them and will be there after.

Long after, unfortunately. Watching it, I felt like a lot of goals were gonna get scored. Schelotto's two in the first half were lucky and wonderful, respectively. A third would surely come. Yes, but to the wrong team. And then another. And one more. Real Salt Lake 3, Columbus 2. Tortured segues and all.

The bad part is, I wanted them - nay, counted on them - to reach the final, so it would be Crew-Gals.

The good part is, I can now unashamedly out myself as pro-Gals. With the exception of Beckham, who should stay the heck out of MLS and devote himself entirely to underwear modeling.
Posted by mood at 11:02 AM No comments: