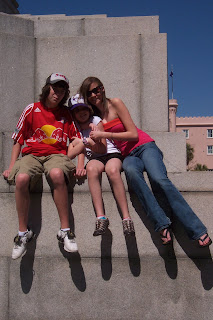 We had a couple of hours to kill post-checkout and pre-game, so we took it to the streets of Charleston.

Embarrassing admission #1: I thought that pink building behind my beautiful children was The Citadel. Nope, it's an Embassy Suites look-a-like. My bad.

Embarrassing admission #2: We had no clue where we were or where we were going, but we were *near* the battery (if 10 blocks counts as "near"). We parked at the Visitor Center and visited a bit - and you had to stand in line to ask a question!!! Then we took off down the street looking for the ocean. Well, we saw a lot of homeless people, a lot of expensive stores, a bunch of dogs being walked, a gazillion old bricks, but no ocean. We did find another Red Bull fan/employee outside a wonderfully aromatic cafe (too aromatic for the rest of the Jenkins Five, but full disclosure compels me to say it's usually me being gastronomically unadventurous). But it was fun. And that's the important thing.

Thing to Be Proud of #1: We were on time to that game. We even had time to pee before kick-off.

The Red Bulls did not have a whole lot to be proud of, all things considered. A 1-1 tie with a USL team that has just 2 weeks of training compared with, what? six for the RB? That's an eep. A lot of bad passes, some questionable movement, a shoe lost here, a temper lost there. It is my biased opinion that these things will work themselves out before the season begins. 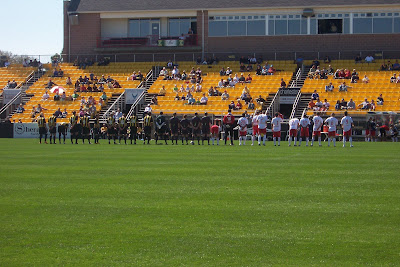 Embarrassing admission #3: it never really occurred to me to sit on the other side. Looks like we could have had the run of the place. But we went back to the general Row R (that does not actually exist) vincinity, and the older three of us got sunburned for our trouble. But if you go here and click on "watch" March 16, you can see the nebulous blob that is me and the fam left of center just above a blue MUSC sign.

I was certainly impressed with JPA's skill, but I was even more delighted to see some of my faves: Jeff Parke, Carlos Mendes, Seth Stammler. And a lot of faces we didn't know. We did figure out Sinisa Ubiparipovic, who came out at half time to warm up and looked in our direction when I attempted to pronounce his name. And there was this other guy who kept running around the field, looking ridiculously familiar... 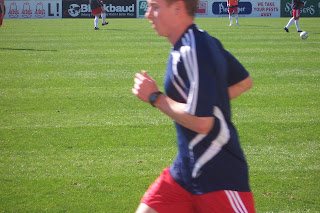 Eric Brunner, RBNY's #1 draft pick. D'oh!! My bad again - it's Chris Leitch!! So maybe I'm not the most knowledgeable fan. I hope they appreciated my applause and stand-stomping when they scored, and my chagrin when they were almost immediately scored upon. It's hard out there for a soccer mom. But I'm happy to know that the Charleston Battery was showing me the love. 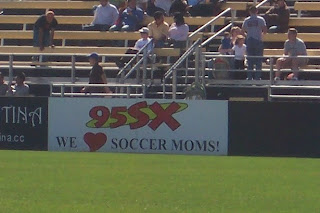 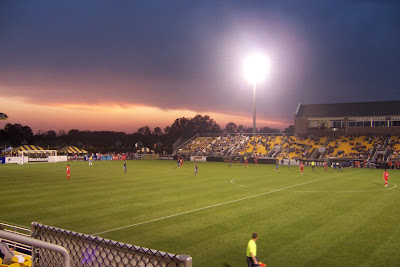 It was a dark and stormy night...

Well, it didn't start out that way, but that's how the first night of the Carolina Challenge Cup ended.

We were just a little late. Maybe five minutes and it was all the fault of Sticky Fingers - I have never seen an empty restaurant be so slow. And, according to Austin, the ribs weren't all that. So, the game is already in progress as we step up the metal ramp into the stands and I find myself in one of those Twilight Zone kind of moments: there in front of me, looking slimmer than I thought he was but taller at the same time, is Danny Dichio, Toronto F. C.'s (English) version of the Tasmanian Devil. It was a low-key OMG moment, all puzzled recognition slapped upside the head by deflating reality check. It's ONLY Danny Dichio, after all. But ladies, he's well worth a gander. And the rest of the Toronto/San Jose game was like that - 'hey, there's Joe Cannon!' 'Isn't that Ned Grabavoy?' 'That guy from Kansas City...Nick...Gonzalez? no, Garcia!' The stadium was not even the size of my kids' high school football stadium. Literally, there were many moments I could have touched these guys. And you could hear every R-rated word they said. I know that makes me sound all stupid fan-girl, but it was cool. 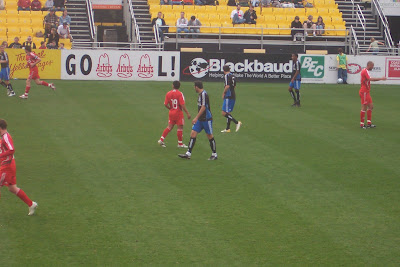 Like sticking my head inside my television or something.

And no hallucinogenics were involved.

San Jose was winning 1-0 when the game was called for lightning. Red Bulls/Charleston was postponed until 3 P. M. Sunday, so we Plan B'd it, and stayed a little longer than we planned.

They were having a sale. Well, not really, but I hadn't seen these before.


The Hunchback of Craven Cottage! 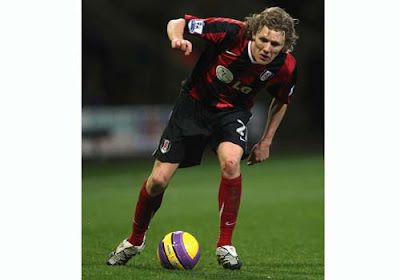 What the heck are they looking at? 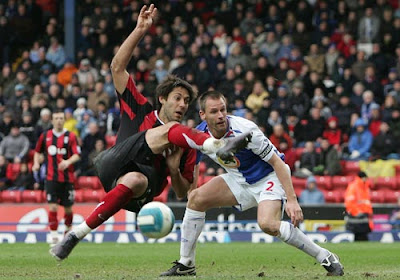 We *Can* Be Heroes 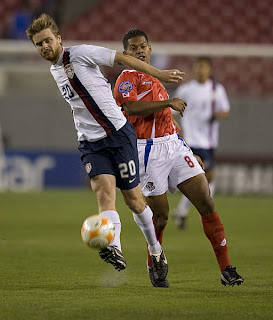 Yes, we can be heroes, even if we didn't much look like them Thursday night. USA 1, Panama nada. It wasn't pretty but it was 3 points.

Random observations (and, truly, are there any other kind?)

1. Eddie Gaven played well. The facial hair is not working for him however.


2. Christopher Sullivan wins the My Mood Swings Favorite Soccer Announcer Award. I find his comments as intriguing as his accent. And he wasn't doing the game last night. Let's just say, well, if you can't say something nice...Ah-do. EEE-do. Please learn the difference before the next game, Christian Miles. It was like being trapped in the Letterman Oscar joke-gone-bad (Oprah, Uma - remember that?) 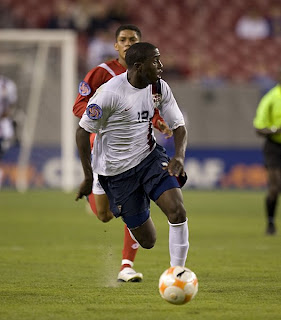 3. Can we get some decent seamstresses working on these uniforms? Look at those patches. They look photo-shopped!

Saturday is the final game of the group round - we play Honduras. I'll be there in spirit only, because, well, I'll be over in South Carolina watching Jozy's regular gig at the Carolina Challenge Cup. 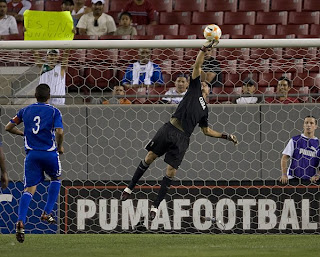 (one of the few Seinfeld episodes I do recall)

Seven Cuban soccer players, including these two pictured, have gone missing, which presents their team with one heckuva dilemma tonight. They had 18 players here. Seven have checked out and one is serving a red card suspension so he won't be eligible for tonight's game. My math is lousy, but I figure they've got 10 players available, which is one less than the 11 *usually* started. If they have to drop out of the tournament, how will that affect the group standings?

Per Fox News (I always read that "News" as "Poetic License")team official Luis Hernandez, when asked how the team planned to handle the situation Wednesday (before the news of the other 2 disappearances), said, "Win - with the five, without the five - win."

Update: My math was good, but my starting number was faulty - according to their official CONCACAF roster, the Cubans brought 19 players. They will have just enough to play as long as nobody else takes a long walk or gets injured.

Might have been a better idea than watching out U-23s play Cuba last night. Cuba Libres certainly would have eased my pain because it was my fault. I have to own up to it. After Freddy put in that first goal early on, I said we're gonna get at least 3, maybe 5 or 6!!! I was that excited. But it was not to be, and a disappointing 1-1 tie has everybody expecting *major* improvements Thursday evening. When life gives you lemons, when there's no where to go but UP, etc., insert cheesy stiff-upper-lip metaphor here.

1) Dax McCarty. I don't remember him playing all that much or all that well for Dallas. He looked confident, energetic AND consistent. 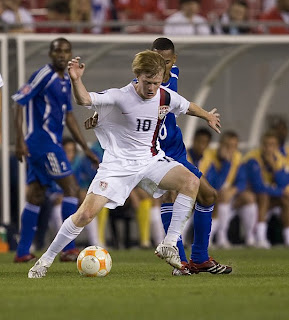 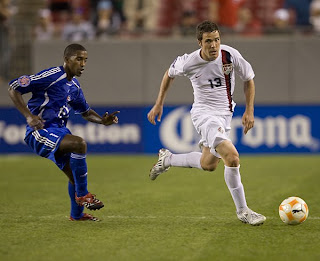 ozy Altidore gets all the kudos, but I am so glad HF's a Red Bull. 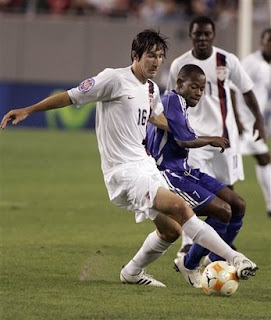 3) Sacha Kljestan (doing the hokey-pokey, left). Honestly, the game changed when he came in. Freddy is the obvious MOTM, but Mr. Kljestan's a close second.


Bring on Thursday. Bring us redemption.
Posted by mood at 8:55 AM No comments: 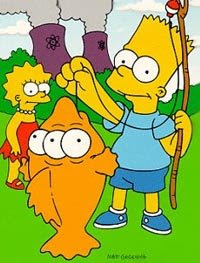 And not a drop to drink! I have read about pharmaceuticals causing bizarre wildlife mutations and disease (inter-sex fish? vultures with kidney failure?), but I had not made the mental leap to these drugs being in the water *I* drink. Best reason yet to drink bottled water (assuming it's not actually tap water!) or other beverages...

Watersheds are big news in East Tennessee this week. At least the signs for them are. TDOT and the Department of Environment and Conservation have partnered up to create awareness of one of Tennessee's most valuable resources - our watersheds. I saw my first one while tooling westbound down I-40 on March 1: Now entering Holston Watershed. I state this to make one thing clear: I saw it before Sam Venable did. Go, me.

Photo forthcoming.
Posted by mood at 8:57 AM No comments: 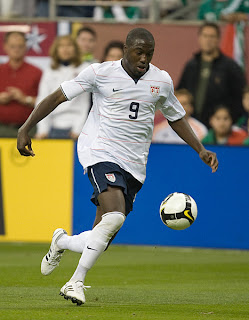 The Olympic Qualifying roster has been set. And it was out yesterday, but darn the bad luck, I didn't venture into cyberspace at all. Obviously, the lack of Feilhaber-ness is disturbing, but I'm hoping that means good things for Benito - like some PT at Derby. And two of my faves, Jozy Altidore and Eddie Gaven feature, so, yay! And it begins tomorrow, so double yay! Confession: the EPL is a substitute for MLS, but it's not a very good one for me. God knows I've tried to get interested, I've put forth effort, but it just ain't taking. And it seems like eons since the MLS Cup. This U-23 tournament is a nice little h'ouerve d'oeurve appetizer before the MLS banquet begins. To continue the metaphor (because I'm hungry, go figure!) next week's Carolina Cup would be the soup course; opening weekend a really delicious salad; this summe 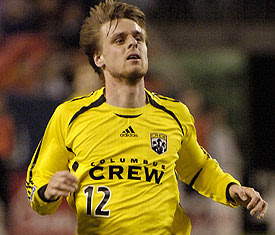 r would be the main course - something hearty and filling - and then the playoffs and championship the dessert.

And here's wishing these two little cupcakes and the whole team good luck.
Posted by mood at 9:10 AM No comments:

I set a new Personal Best 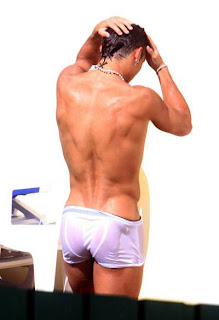 in weird and wacky dreams.

Sometime during the lovely quicksandish sleep I get between the moment my husband's alarm clock sounds and he gets up (shaking the bed like a series of minor earthquakes) and the moment my own alarm clock erupts, I had the most peculiar dream.

I dreamed I had another baby, which is impossible enough, but then this particular baby was actually a hamster.

And I named her Linda.

So what does all this have to do with the bathing beauty screen right?

He - Cristiano Ronaldo, Manchester United's version of Jesus - was in the dream, too. At some strange and marvelous water park where I took Linda. And I asked him if he would go home to Spain or to Brazil (he's from neither). He took offense, not because I failed to realize he was Portuguese, but because, as he said, he was going home. To New York. Because he was American.

Let that prove prophetic. Let him one day (and before he's washed up, please Jesus) be a New York Red Bull.
Posted by mood at 12:44 PM No comments: 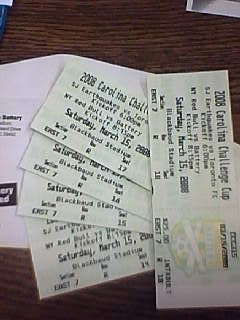 These are my tickets. I keep looking at them, admiring them, touching them. I have traversed the long desolate expanse of the Off Season and reached soccer nirvana - well, the MLS version anyhoo. Like a plant drawn toward the sun's rays, I am drawn to the beacon of pre-season action in Charleston.

Have I mentioned it's a bargain? Sure, they aren't *real* games, but I WE get to see two of them. For $25 each. Stick that on your grill and smoke it, NFL. The new and improved San Jose (argh) v. Toronto, and the fabulous Red Bulls v. the Charleston Battery.


*a little shout-out to the long defunct Porpoise Island.
Posted by mood at 1:34 PM No comments: