Adventures at the Ballot Box!

So, there was some voting going on Tuesday.  And, good American that I am, I wanted to participate.  But, because I can do really really stupid things, my photo id went to Knoxville while I stayed home.

A quick Google revealed that I was entitled to vote provisionally and I could bring my id in to the election commission within 2 days to be COUNTED, so off I went to the polling place.  The man behind the table asked me for  id and I said I did not have it, but understood I could vote provisionally. He gave me a look and away he went.  He returned with a file of instructions. I was diverted to a table on the other side of the gym and we endeavored to figure out how to accomplish a provisional vote.  I was, at 6 PM, the First*.
So, I did my little paper ballot and folded it up middle-school style to fit in the too-tiny envelope.  I was told I was eligible to vote in a certain state race, but was unable to because it was not on my pre-printed paper ballot.  No one seemed too concerned about that, and I didn't press the issue because I knew that election was already won.  But their unconcern did concern me.

And finally, I prepare to cast my vote.  To place it in that most sacred of American institutions, the ballot box.

And I can't.  My election helper held  the box up.  He turned it over several times.  He caressed every corner of it and so did I.  Every orifice on that sucker was locked up, nay sealed up with all kinds of official looking wires and tags and actual locks.  He took my envelope and shoved it into a crack where the lid and the body meet and that was that.

Now, sure, that was a little bizarre.  Well, hell, actually, that was a LOT bizarre.  No way to put the vote in except in a manner that would probably (in Florida) cause the ballot to be declared invalid.  But I'm a trusting person and I was 99.9% sure this election wasn't going to hinge on my vote.  But I like to participate.

Today I went and presented id and again flustered the election commission to pieces. This whole provisional thing was new for me as well.  But since this was the first, or possibly the second election requiring photo id, I would have thought they might have made some, ahem, provisions for these kind of situations.

So that was my 2012 Electoral Experience.  Ballot obstruction and poll workers more at sea than the borough of Manhattan.

But my American dream came true.  Again.  In spite of everything. 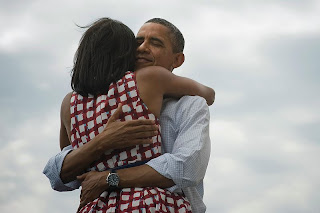 *seriously?  at 6 PM?  I'm wondering how many people did not have id and did not press the issue.
Posted by mood at 2:26 PM No comments: