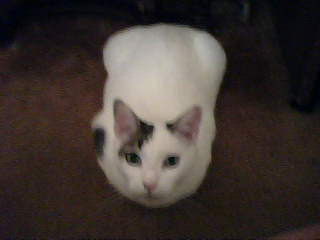 No, he's not really legless. We call this pose "meatloafing" because, well, he looks like a fluffy white meatloaf. With a couple of burnt spots. Speck is our special needs kitty. He's got that idiot savant thing going. While he's a genius at killing small mammals and presiding lion-like over our yard, his vocalizations need work. His meow is like one of those silent dog whistles, just at the edge of human hearing. And his purr - well, I can purr better than Speck. He also has issues with doors. If he is in, he wants out and if he's out, he wants in. I think he would be driven mad by having a pet door at his disposal, so we don't have one. We call him Speck not because of the specks (otherwise, we'd call him "Specks" now wouldn't we?) but because our first sight of him as a little white speck hopping through the tall weeds next to our yard. He plays bigger than he is. 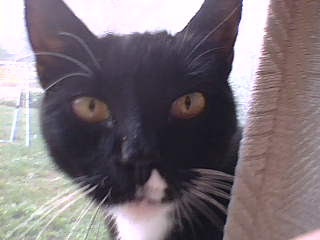 This is my little black boy Socks. My son always calls me a racist when I call him that. I don't mean to be. I call his brother my little white boy, so I guess I'm being equally racist, which in the confounding algebra of political correctness might reduce down to non-racism. I hope so. It would be difficult to stop calling them 'the white cat' or 'the black cat' at this point in their lives. Socks likes to hang out on the windowsill. His evil white brother only allows him the freedom of the living room and the master bedroom. Everywhere else, he gets attacked just for breathing. By the way, unlike his brother, he *can* purr. Quite nicely, the sound of which is one of the great pleasures of cat companionship. Many evenings we snuggle up together reading and/or watching tv. The only problem is he drools when he's happy.

So, those are our cats. Not great literature, sure. But a post! A post! My kingdom for a post!
Posted by mood at 10:06 AM No comments:

I am still alive.

but buried in work. I will get back to slacking shortly. Here's a gratuitous soccer hottie, just cuz. 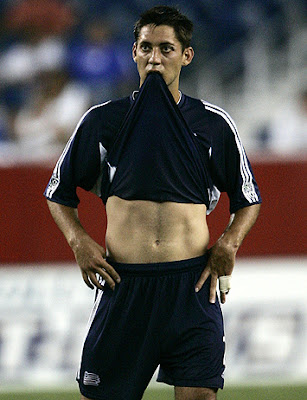 well, whatever you want, sweet pea.
Posted by mood at 4:49 PM No comments: 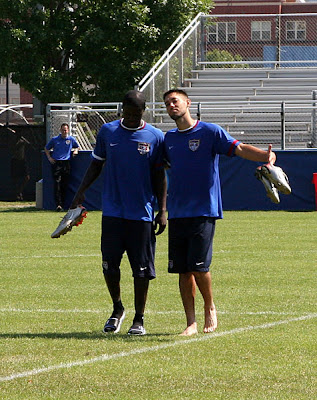 Now that you're Fulham's Player of the Month. 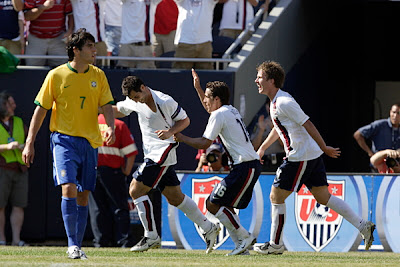 USA 2, Brazil 4. Ok, we lost. But Brazil did not score one run-of-play goal. Not one. And we did. So, I give us a solid B and say that was some serious hotness on the field: Kaka, Benny Feilhaber, Clint Dempsey (with a very nice goal, but no dancing, dammit!), Little Michael Bradley, Josh Wolfe, Oguchi Onyewu... Serious heat, peoples.

Out on the left coast, the Red Bulls got pounded by Chivas USA. Yes, you read that right. All I can think right now is 'least said, soonest mended.' Let's hope so.
Posted by mood at 4:05 PM No comments:

So, It was my birthday 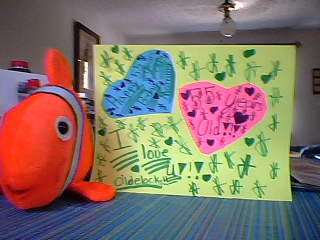 and this is what Josie gave me. The Nemo she won at the fair, to remind me to 'just keep swimming, just keep swimming - what do we do? we swim swim swim' and this lovely poster that declares her love for me, adds 10 years to my age and calls me Oldelocks to boot.

If she had been born first, she'd be an only child.
Posted by mood at 2:41 PM No comments: 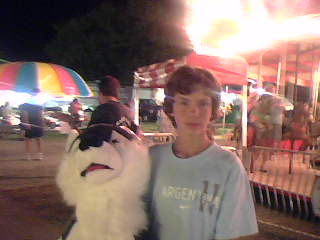 Took the gang to the Sevier County fair last night.

Josie beat her older sister in the water gun game and won a stuffed Nemo.

Austin took $2 over to the basketball game. He paid and the guy kept giving the ball to this other kid who could not sink a shot and kept handing the guy another $2 to try again. I was just about to go postal on him when he realized he was ignoring Austin, apologized and gave him the ball. Austin moved a step forward. He got into his "shot stance" (I don't know what else to call it, so I apologize - apologies are contagious!). I was trying to say bounce it a couple of times just to get a feel for it and have a little more of a chance at it, but he was already arm back and throwing.

Nothing but net, baby.

Fortunately, we had a pedestrian witness. The guy had gone back to LoserDude and was paying absolutely no attention. In fact, he seemed quite incredulous that it had gone in. Like that never happened at his game...


Anyway, Austin has his Major Prize. I'm glad it's not a leg-shaped lamp.
Posted by mood at 9:56 AM No comments: