Things to note: it's in COLOR; Tim smiles - heck, I think everybody smiles at least a little - and makes non-threatening eye contact; Brendan shouts out MLS. Too bad it's Real Salt Lake. (Joe Cannon is a Rancid fan, but somehow I don't think Brendan is his anonymous season-ticket-holding friend - my money's on Matt. He looks like a goalkeeper's kind of guy.)

That's Not My Name 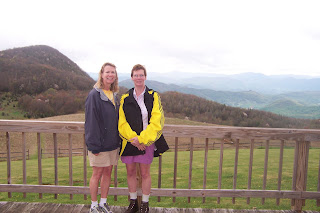 Is it a crime to hike under an assumed name on federal lands? If so, this post is just a product of my imagination. I don't want Homeland Security putting me on some list of suspicious characters. Color un-coordinated characters, sure. But not *suspicious* characters.

It's not my fault my dad has terrible handwriting. And I'm not blaming the poor woman who attempted to decipher said handwriting and write out our name tags, but Sebbie Jerkins is not my name. Vim Jerkins is not my husband. I am left wondering who Perv Jerkins is, because he is no relation of mine although his name was on the guest list.
It amused the h-e-double toothpicks out of the rest of my family, however, and it worked right in with my plot to remain masked and anonymous at these GSMNP 75th anniversary gatherings.

Beautiful starting point - the Appalachian Highlands Science Learning Center over on the Cataloochee side of the park. Never had been there, never had heard of it. Driving up was like driving

to Mt. LeConte or something equally surreal. Isolated isn't quite the word, but close. Serene. Secluded. Tranquil.

2.3 down McKee Branch, 3.2 down Big Fork Ridge, out at Cataloochee for some fabulous food and an elk program. Down was the operative word - my knees! my thighs! the blister that erupted on the back of my left heel hasn't quite healed yet. Yes, I've been a sloth all winter and it shows.

Wet and muddy, but it did not really rain on us. Saw some wildflowers and some salamanders, identified by the lovely and talented Ann Froschauer, the 75th anniversary coordinator (googled you, Ann, to be sure I spelled everything right!) That's a showy orchis there to the left, alongside my sister Mary Ann's hand. Was hoping to get up close and personal with an elk, but he was not cooperative.


And just for the record, that's not my name.
Posted by mood at 2:15 PM No comments: