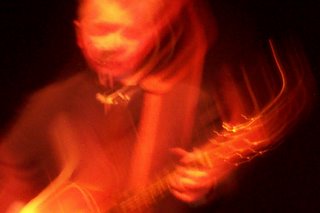 Ok, Ok, so it's an old photo. From the 2005 Asheville show, to be precise. But the ones I took with my telephone, uh, um....well, they suck. And I think this one is so bad, it's cool. He is some kind of demon fire god. In the most polite way possible.

I got our tickets through an online presale via the John Prine Shrine, thanks to my Good But Anonymous Buddy who pays attention to these things. The deal with their presale is you are guaranteed seats in the first 6 rows, but you can't pick up your tickets until one hour before the show. Because I am never early (and really, isn't being early just as rude as being late?), the opening act was already onstage when we arrived. I showed the girl at Will Call my Sam's Club card because I could not find my license and read PT104. Oh, fuck. We're on row P, which is not in the prescribed first six rows. I regained my composure and looked again. It says Orchestra. Oh, fuck! We're in the Orchestra Pit!! I wait very impatiently for a beer and run to the nearest usher with my ticket, heart beating wildly, I'm beginning to sweat. She looks at the ticket and doesn't have a clue where. Oh, fuck. Maybe we're upstairs. Another usher grabs the ticket, peers at it intently and positively puffs up. He marches us with pomp and circumstance to the stage and points to the very front row. We are center. Dead center. John Prine will be standing 10 feet directly in front of me.

I wait to be escorted back to the plebian horde. There are four empty seats beside me and one by one they fill up (with brothers! hey to you all if you see this!). Each time a brother comes to take a seat, I expect to get thrown out. I have never been front row anywhere for anything and this is possibly the most amazing musical moment of my life. There is no massively huge or tall person in front of me. I will not have to play Bob & Duck all night. I will have an unobstructed view of John Prine. 10 feet away. Twelve o'clock.

I hope he's not a spitter.

The opening act was a lady named Minton Sparks, and I want to apologize to her for walking in on her second to last song. Only they're not songs exactly, being spoken but accompanied by guitar. It was kind of hillbilly poetry slam meets performance art. Interesting but peculiar. A long, long, eternal damnation kind of wait ensues as she exits stage right. The lights come up, the roadies come out and start placing bottles of water everywhere, bringing more and more guitars and mandolins and a stand up bass (which is also orchestrally known as a double bass according to #1 son, who was also present but sitting with the riff raff in row F). Should've done a drink/bathroom run, but I was afraid to leave. Really!

Finally, the lights go down and there it is. The moment I've been waiting for - face to face with JP, and he's throwing down a raucous version of Your Flag Decal Won't Get You Into Heaven Anymore. If you thought maybe he'd become sedate and conservative in his golden(ish) years, you thought wrong. In April, it was a 'cowboy from Texas' who started his own war with I-raq. In a post-Katrina America, it was 'that asshole from Texas,' and that, I am happy to note, brought a wave of cheers across the beautiful Tennessee Theatre. Mr. Prine played all the 'hits' - not that he has any, but the Ones People Expect: Sam Stone, Grandpa Was A Carpenter, Paradise, Hello In There, Dear Abby. It was often a mammoth singalong. He played The Most Perfect Song EVER, dedicating it to his Ma. The beginning of it makes me think of rain drops running down a windowpane, all cold and lonely and warm and tender, all at once, the absolute sound of bittersweet, and I hear it and I swear I have tears in my eyes. John Prine is singing Souvenirs 10 feet in front of me. It. Was. Amazing. He has fat stubby hands like Elvis, so it gives me hope: one day, maybe, I can get my stupid fingers to make that sound. He played Crazy As A Loon, and dedicated it to One Bullet Barney, a/k/a Don Knotts. He did some Jed Clampett dancing during Bear Creek Blues. I didn't think he could spit after the cancer/radiation thing but he did drop a few wads here and there. Ain't Hurtin' Nobody hit a big fat groove and just went on and on and people should've got up and danced, but nobody did. I heard some concertgoers were taken aback by folks shouting out requests - I don't think it was a problem for Mr. Prine. And I don't think you go to a John Prine concert to sit in respectful silence. He's not that kind of demon fire god.

The band was incredible. Mostly playing mandolin but sometimes on guitar was Pat McLaughlin, who brought a Conehead sensibility (and by that I don't mean that he's strange looking, but that he seems like he's from another planet, a very FUN planet) and some Johnny Rotten punkish/impish fun to the proceedings. Mostly on electric guitar, but sometimes on mandolin and harmonica was Jason Wilbur, who should smile more - and I hate saying that because I was always told that as a child. On that stand up bass was Dave Jacques, who has no web presence, but lots and lots of soul. I know Jason and Pat added some vocals, as well, but I'm not sure about Dave. John Prine was blocking my view.