Soccer took me to Knoxville this past Saturday, so an adventure was planned.

Been wanting to check out the Three Rivers Market on North Central Street, but had qualms about taking my Soccer Mom self into such a den of hippie freakiness.

Or at least, that's how I pictured it.  Creaky wooden floors, dust motes riding the sunbeams down from the transom windows.  Flower children smoking clove cigarettes in the parking lot.  Everything smelling of patchouli. 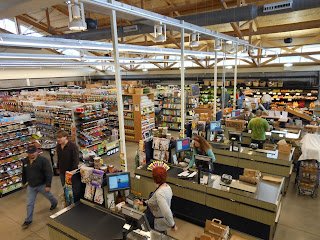 Well, no.  Perhaps the windows are a bit transom-esque, but all in all in no way resembling my mental picture of a health food co-op.  It was bright and new and the very epitome of the 21st century modern market place.  And they have EVERYTHING, and a lot of it is organic.  I loved the bins - oat flour, flax seed, spices, etc.  THIS is where I'll be buying that sort of thing when I'm in town.  I just did a walk thru and picked up a couple of things (chronically short of cash, I am).  Organic avocados at $1.29 each were my bargain-of-the-trip and Josie bought some kind of protein bar that she said was really good.  I think it was a PowerBar.  Do not quote me.  Three Rivers had all kinds of beers, a hot food bar, local meats and cheeses, and an unbelievable assortment of foods that go under the heading "whole grains."

Then I went downtown and littered.  And I had the children help.  Technically, we recycled, but since we're not  Knoxvillians, I'm pretty sure the Recycling Authorities would consider this a crime.  My bad.

So, out gallivanting in parts unknown and committing crime.  Adventure Level 7!

p.s. I also stole the photo from Three Rivers, so consider that crediting the source.  :)