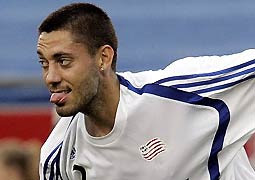 Where in the world is the Dempster going to go? It's a veritable vortex of gossip, lies and innuendo at this point, in an understated soccer-in-the-USA way. A tiny horde of fans is all atwitter. America at large with no clue.

I was leaning toward Charlton, myself. Mostly because of Dempster's 'I want to make a difference' statement and the fact that he fired his agent, making the move egotistically likely and stunningly stupid. I like the sound of Charlton. Sounds like cigarettes. But the hot money is now on Fulham. Long shots West Ham and Atletico Madrid have also been bandied about with impunity.

Reason I want Demps in EPL: Fox Soccer Channel. I might get to see him once in a while. They do show a little of La Liga, I think. Or maybe I'm thinking of Serie A.

Reason Demps should go to EPL: to kick some pissy Englishter ass.

Reasons Demps should not go to EPL: It gets dark at 4. The weather is nasty and the rap is worse. He could get nicknamed McDemps. Or McDumps, depending on how those pissy Englishters take to him.

Reason Demps should go to La Liga: The climate. Gooch. Food.
Posted by mood at 11:12 AM