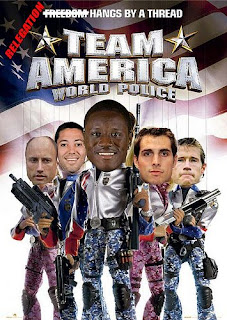 Big ups also to them Toros Rojas, smacking down the Gals in L. A.! Juan Pablo Angel gets his first goal of the season, David Beckham gets his first yellow. Methinks we got under his very lovely skin just a little. Bigger ups to Columbus for keeping the streak alive. I was mainly watching RB/Gals, but I would wander over to Crew/Quakes now and then. First peek, Quakes are winning 1-0. Next peek, Crew is up 2-1. Final score Crew 3, Quakes 2. I think I missed a great game.

A couple of suggestions: Left coast games should be played in the afternoon, so that they are not the Late Late Late show at my house. It was all I could do to stay awake. Also, could the Galaxy always play "skins"? 'Preciate it, MLS.
Posted by mood at 9:14 AM