Battle of the The Bs 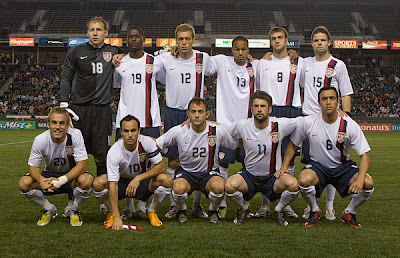 Well, not all the players were B teamers, but don't expect to see many of these faces next month for the Ruckus at Reliant February 6th. Anyway, Team U! S! A! defeats Sweden 2-0.

It was a good game. Landon Donovan put them ugly boots to good use and broke (another) record - 35 career goals. And still just 25. This kid could go places.

Eddie Robinson scores his first goal in his first ever game. I think there was another kid named Eddie who did something like that and now he's playing for Fulham! Mr. Inconsistency, meet Team Mediocre. Let's hope Eddie R stays with MLS.

Curious thing about the photo: the apparent lack of love for Taylor Twellman. Is he the Odd Man Out? Is he on his way out? Stay tuned.

p.s. apologies for the lack of timeliness. Work sucks.
Posted by mood at 9:21 AM